Valomyr is one of the Behemoths in Dauntless. There are 2 versions of Valomyrs throughout The Shattered Isles. 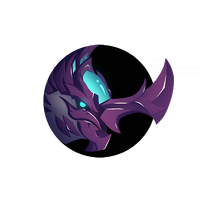 "Ready for a light show? You're tracking a Valomyr."

Untold centuries spent evolving in the concentrated radiant layers of the sky has given the Valomyr a truly alien appearance. The aether that comprises its life force and physical form is barely disguised within its organic exoskeleton, but there can be little doubt it is a creature of pure power. And it can use that radiant power form of beams of razor-sharp that tear up the earth beneath its feet and any organic life foolish enough to get in the way.

But energy beams are just the beginning of what the Valomyr can do with radiant aether. Perhaps more than any other Behemoth it relies on energy and power more than physical strength and kinetic strikes to defeat its foes. And it uses this energy in dazzling and dangerous ways.

One of its most effective defenses is also a potent offense: swarms of radiant bullet-like spheres Slayers have nicknamed "starflies" which swirl around the Behemoth and create a swarming vortex of painful impacts. It can also create and control clusters of radiant drones that emit even more deadly light beams. The Valomyr unleashes these drones as a relentless wall of energy that pushes Slayers where they want them—or prevent them from approaching the Behemoth at all.

If the Valomyr feels cornered it can ride the radiant aether to a different spot on the hunting ground. These "flash jumps" allow them to easily evade slow or localized attacks.

-The Valomyr’s drones are part of its body. Breaking parts reducing the amount of drones it can call.

-Interrupt a Valomyr at the start of its aether charge by inflicting as much damage at once as possible.

--Break the Valomyr’s horns to prevent it from using its head-beam attack.

-Ambient aether forms archonite shards around a Valomyr’s body due to the purity of the radiant aether in their bodies. Green shards heal over time. Red shards increase attack damage. Purple shards form a shield against radiant damage. The shards dissipate after a short time.

Valomyrs can be found on the following Islands.

I first learned of it while exploring deep in the labyrinthine vaults where the Orrery keeps the most ancient knowledge – pre-Upheaval pieces, firsthand accounts of the Upheaval, and the like. That is how I know the creature’s name, and why we are right to call the Slayers to focus on the singular threat it presents. This is why I know the Maelstrom is growing, for it has disturbed a species of archaic god-things that have been content to feed on the radiance of the highest skies for ages.

I admit, I had thought - perhaps hoped - the species would for once prove to be a legend. We have survived so much, and yet the battle against the Behemoths continues. A titanic beast that feeds on hard light and commands a swarm of deadly drones that can slice an airship’s sails to tatters in an instant is the last thing Ramsgate needs, to say nothing of the rest of the Shattered Isles.

But we can no longer ignore the falling stars, or write them off as aetheric phenomena. There can be no doubt. The Valomyr has arrived in the Maelstrom.

– From the Personal Journal of Dr. Shaed Priyani