The Middleman is one of the NPCs from Ramsgate in Dauntless. The Middleman allows slayers to purchase and fuse Cells.

"Some things shouldn’t be negotiable. Like prices. Or promises. Or gravity."

Mysterious, masked, and in the market for anything, the Middleman has long plied the people of Ramsgate with irresistible cell fusion opportunities, but little else is known about this enigmatic merchant. He is believed to hail from Ostia, the most advanced industrialized civilization in the Shattered Isles, where he learned the value of trading in anything and everything on the black market. He has operated in the city of Ramsgate for years, yet only the Regent claims to have ever seen his face.

"A treasure among the dross."

Perhaps the greatest mystery surrounding the Middleman—besides his true origin, appearance, gender, intentions, age, and so on—is how he is able to carry his stock with him wherever he goes. Some believe he doesn't — that he simply knows what people want to trade and so brings that with him as needed. Aethersmith Arkan Drew thinks the Middleman may have once been an aethersmith himself, one who now uses a form of aetheric dimensional compression to store his vast stock of cells and proprietary cell-fusion technology.

Whatever the truth is about his methods, the Middleman always seems to have just the cell you need. And sometimes even at the price you want.

Platinum. The cells that are available rotate at each weekly reset but will always be of rank +1. The three cells that are currently available are listed in the table below. Currently each cell can be bought multiple times up to a limit depending on the cell. 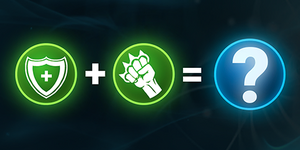 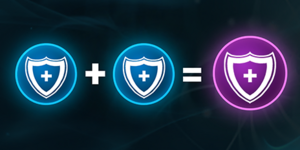 The Middleman also allows slayers to exchange cells in order to obtain higher rarity cells. Slayers will have to wait a certain amount of time in order to complete the fusion, which can be expedited using

Slayers have one free fusion slot unlocked from the start, and two more are purchasable from the Store for 500

Platinum for a total of three slots.

the Middleman can also allow slayers to craft omnicells, which provides a wider range of build options and let you use your own preferred playstyle. Each omnicell has its own passive and active ability.