Edit
This article is a stub. You can help Dauntless Wiki by expanding it.
Reason: "No reason has been provided" 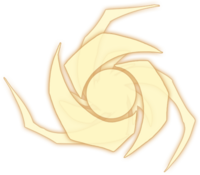 The Maelstrom is a chaotic storm in The Shattered Isles, and one of the most dangerous places in the world of Dauntless. It is the fifth zone of the game, and is home to some of the most powerful Behemoths any Slayer has faced so far.

The endless storm wayfinders have dubbed "the Maelstrom" marks the boundary between the relative safety of the known skies and the destructive atmospheric chaos that exists beyond. Few have ventured into it, and none have ventured through it and survived. Or if they have, they never returned.

The Maelstrom is constantly shifting, drawing away and bringing forth different islands, and Behemoths, as the storm spins.

An arid island that has drifted into the Ram formation for a short time.

A frozen island that has drifted into the Ram formation for a short time.

The island that is home to Koshai, the Sovereign of Thorns, is not a natural formation in the usual sense. Orrery scholars have determined that Koshai itself built Sovereign’s Throne from the rubble of larger islands, binding the earth beneath its feet with the same vines and bramble that channel its power.

An island suffused with alternating currents of corrosive umbral aether and blinding radiant energy, this bizarre interloper in the Shattered Isles is home to terrifying Behemoths few Slayers have ever seen - let alone survived.