Stunning behemoths is one of the most useful methods for both reducing damage taken and increasing damage dealt and if timed ideally a stun can prevent dangerous attacks and even prevent the escape of a behemoth into its second phase. Fortunately there are a number of ways to stun a behemoth although slayers must take note that the duration of several stuns do not stack, in fact if a short stun occurs while a long stun is in progress, the short stun will override the duration of the long stun and the total stun time will potentially be shortened. 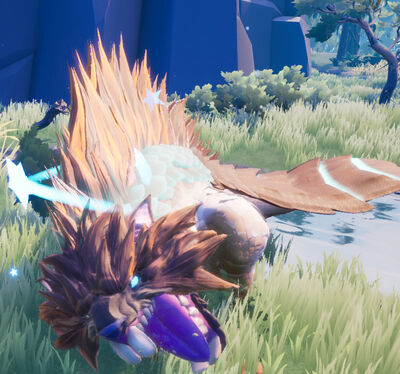 Staggering is the type of stun accessible to most slayers and playstyles. A stagger occurs when an invisible stagger damage meter is filled. This meter is pooled regardless of which part is hit or which teammate deals the damage. Once the meter is almost filled, the behemoth will display a very noticeable dazed effect on its head. Stagger damage is indicated by blue damage numbers and does not affect the Behemoth's basic health pool. Generally, hitting the head of a Behemoth deals higher stagger damage than impact to the legs, but can vary between different Behemoths.

This is primarily dealt by slashing (Sword, Axe, and Chain Blades) and blunt (Hammer) weapons, with blunt-types dealing a higher base amount of damage. There is a minimum damage threshold that must be met to deal stagger damage, so often a lower damage-dealing weapon like Chain Blades will not deal stagger damage when attacking. 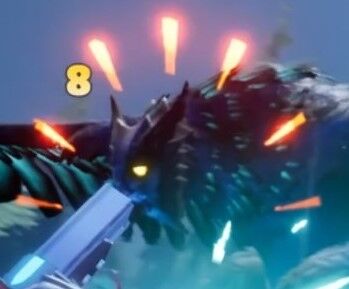 Interrupting a behemoth requires timing a specific special slayer attack with a specific behemoth action. It is the most skilled of all the stuns to pull off but usually also has the most opportunities to occur in a given hunt. Each behemoth will have a different action that can be interrupted with some behemoths having no interrupt opportunities at all. An opportunity to interrupt is characterised by an orange/red graphic being displayed momentarily over the behemoths head as it is performing a charge or other specific action. Some attacks that can trigger an interrupt include but are not limited to: Pike missiles, Hammer blasts, attacks from heavy weapons, most dodge attacks and Repeater mines.

There are two types of Interrupts (or Boops as the general community calls it). Let's call them Timed Interrupts and Threshold Interrupts.

Timed Interrupts are when you hit a Behemoth with proper timing, causing them to flip over you and land a short distance away. Some Behemoths that do this are the Embermane, Riftstalker and Skarn.

Threshold Interrupts happen when the Behemoth takes an unstable position for a few seconds before unleashing a powerful attack. You can Interrupt Behemoths during this by dealing a certain amount of damage (or reaching a damage threshold) before they unleash the attack. Some Behemoths that have attacks like this are the Skarn and the Koshai.

Weighted Strikes is a perk that not only deals a flat amount of additional stagger damage, but also enables some special attacks to interrupt where otherwise they wouldn't be able to.

Every time a part is broken a short stun will occur, this can happen as many times as there are parts to break, with some behemoths that regrow parts indefinitely. Each part has its own separate health pool and is unaffected by the health of other parts.

Perks that increase or deal part damage include Bladestorm and Sharpened.

Slayers that deal Shock damage fill an invisible meter that is pooled based on shock damage dealt from the entire team. Once filled the behemoth will play an exaggerated electrified animation and will be stunned for a very short duration. This type of stun is the least common to occur in any given hunt, happening only 1-2 times if every teammate is dealing shock damage.

Community content is available under CC BY-NC-SA 3.0 unless otherwise noted.