Stormclaw is one of the Behemoths in Dauntless. There are 3 versions of Stormclaws throughout The Shattered Isles. 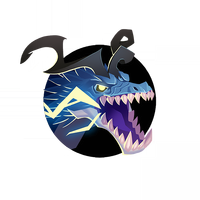 "I hope you're wearing your insulated pants, skipper, because you’re on the trail of a Stormclaw."

Fast as lightning and merciless as a hurricane, the Stormclaw superficially resembles the blaze-feeding Embermane, but aside from speed and general anatomical layout the two species aren't too much alike. Where the Embermane is a charging beast intent on rolling over any threats, the Stormclaw builds lightning fences with jagged archonite "fence posts" and shock walls to trap Slayers inside a lethal prison of electric force. Even as the Stormclaw cuts off a Slayer's avenues of escape, it almost never stops moving and can therefore be tricky to hit. Dr. Priyani hypothesizes that the Embermane and Stormclaw may once have been used together on the battlefields of the pre-Upheaval world. Perhaps Embermanes were sent to break through the battle lines to scatter enemy forces and cause lasting pain by starting fires, while Stormclaws struck like thunderbolts to lock up separated foes in electric deathtraps.

However they may once have been used by their long-dead creators, Stormclaws have had many centuries to evolve in the wild. Their massive, twisted horns contain veins of living archonite that let them metabolize aether from their surroundings—or store it up to use later as food, a defense mechanism, or to strike at a potential threat with a lightning curse. Broken horns can be highly valued by eccentric collectors if they remain mostly intact, but Kat Sorrel has made sure no such collectors set foot in Ramsgate. The last thing she’s interested in is the rise of a black market in dangerous Behemoth parts in the city. Such parts are best used by trained professionals to forge weapons, craft armour, and find weaknesses Slayers can exploit on the hunt. Not, Kat firmly believes, not hanging on an interior wall of someone’s private castle.

—The Stormclaw can only use its lightning curse attack while its horns are intact. As in unbroken. Make them broken.

—Deflect a Stormclaw’s shock projectiles right back at them to cause electric feedback and stagger the beast.

—The "fence posts" of the Stormclaw's lightning fence aren't immune to weapons. Destroy the posts to take down parts of the fence.

—Stormclaws must concentrate to place its fence posts. The perfect time for Slayers to interrupt them.

Stormclaws can be found on the following Islands.