Shrowd is one of the Behemoths in Dauntless. There is one variant of Shrowd. 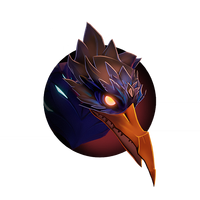 "That’s the Shrowd. It's a winged horror that can see into your soul and break it without a thought... if you let it. "

The Shrowd is part avian nightmare, part unspeakable horror, its grim, imposing visage cloaked in shadow except for its glowing eyes. It bears a passing resemblance to other feathered Behemoths like the Shrike or Skraev, but has little in common with them beyond a general avian bipedal shape and long wings used for short glides. The head of the Shrowd is elongated and dome-like, as if it was wearing a hooded cloak, and it has three glowing eyes that flash like haunting beacons in the darkness of the Umbral Void.

The Shrowd's raven-like appearance indicates to some scholars that the creature is not just a Behemoth, but a predicted mutation brought on by extended exposure to umbral aether. The similarity to crows and other corvids may simply be coincidence, however. The midnight-black coloration of the Behemoth's feathers and scales, as well as its heavy, dragon-like tail, could instead reflect predictable features present in many umbral-powered life forms.

-A Shrowd will grow desperate when low on health, and spawn more clones and umbral doom orbs.

-Shrowds can be interrupted while gliding during their rage phase.

-The Shrowd’s umbral corruption will apply the corrupted status effect, draining health and stamina. Attack the Shrowd or its clone to clear the corruption away.

-A Shrowd will spawn umbral doom orbs that will detonate if left long enough. The damage dealt will reduce all Slayers to 1 HP, so if you can’t stop the detonation make sure you have healing at the ready.

Shrowds can be found on the following Islands.