Shrike is one of the Behemoths in Dauntless. There are 3 versions of Shrikes throughout The Shattered Isles. 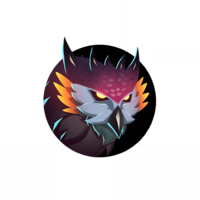 "Shrikes might be some of the most common Behemoths in the Shattered lsles, but just because they're familiar doesn't mean they're not deadly."

The Shrike is one of the most terrifying of the common Behemoth species found in and around the Ram formation. Built like a powerful, bear-like biped, the mighty beast is covered in feathers like a bird of prey and uses a razor-sharp beak and piercing talons to tear enemies to shreds. While not capable of true flight due to the density of its skeleton and the bonds of gravity, it can soar short distances low over the ground—usually as a means of charging a foe or fleeing a lopsided battle.

The Shrike is among the most frequently encountered Behemoths near Ramsgate, and indeed their range seems to infringe upon all known human city-states. From Ostia to St. Avellaine Shrikes menace everyone in the Shattered Isles.

—A Shrike will take to the air when enraged, but can be interrupted while it's gliding.

—Shrikes can summon punishing aetheric cyclones with the beating of their wings.

—At long range, Shrikes will whip their wings at hypersonic speeds to hurl kinetic, aether-charged blasts of air.

Shrikes can be found on the following Islands.

The small team of rookies dropped onto the mossy ground with Veran taking the forward position. The Shrike was a good-sized specimen, judging from the Behemoth sign he spotted on the tree trunks and the rocks surrounding their drop zone. A shockingly clear screech pierced the dawn and silenced the birdsong that had moments ago filled the air. The beast was close.

Veran smiled to himself at the thought of bringing it down without help from the captain, who had remained onboard the airship. This hunt belonged to the rookies alone. The team moved forward silently, hands on weapon hilts, and senses alert for trouble.

On Wings of Fear

They didn’t have to wait long for trouble to find them and when the Shrike emerged from the trees and into the lush meadowland, the confident crew of trained recruits knew precisely what to do.

The Shrike immediately became aware of them and raised itself up with its mighty wings, creating a sudden aetheric vortex that whirled straight at the center of the party. Then the fun really began.

Tylin landed the first hit, a strike from his axe driven by a full aether charge. The blast from Kiva’s hammer launched her next into the fray, raining blows onto the Shrike’s head as she descended. Veran took advantage of the distraction to come at the Behemoth from its blind spot. He must have hit the creature a dozen times before it turned on him but he easily rolled out of the path of the Shrike’s brutal backhand. By the time Inez lashed into it from the other side with blazing chain blades, it was already moving to retreat.

Veran allowed himself a laugh. If they gave pursuit now, this party had the real chance to set a record or two.

That was when the second Shrike emerged from the wooded copse and blasted him in the back with a sonic shock wave of aetheric power.

“TWO SHRIKES!” Inez called unnecessarily, giving the new contender an opening to strike at the rookie before she could bring her chain blades to bear. Veran blinked blood from his eyes and was relieved to see Tylin and Kiva move to aid Inez as she dropped to the ground.

Hunting two Behemoths at once wasn’t something a Slayer did every day. They had a difficult choice to make: focus on taking down one Shrike at a time, hoping they could avoid the other long enough to finish off the first? Or split up and rely on their skill as Slayers to take the Behemoths simultaneously?

The former choice was the safe one, if anything could be described as safe in this situation. Unfortunately, it relied on them being able to isolate one of the Shrikes from the other and these Behemoths were not cooperating. Veran’s choice was no choice at all.

“Ty! Kiva!” the hunt leader shouted. “Take our old friend aside and don’t let up. Inez, you’re with me.”

Veran marveled at Inez’s precisely timed movements as she cheered his efficient swordwork. Although he could only see them out of the corner of his eye, Veran saw Tylin and Kiva staggering the first Shrike with brutal hammer blows and charged axe strikes. And when his friends brought down their quarry for good, he let out a shout of triumph.

With renewed confidence, the reunited party closed on their second quarry of the day. This, Veran mused, was the day they stopped being rookies. Today they were Slayers.