Rezakiri is one of the Behemoths in Dauntless. There are 2 variants of Rezakiri throughout The Shattered Isles. 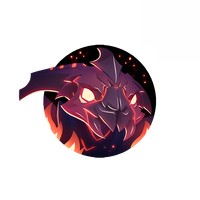 "The Rezakiri was a harvester of souls in those days, taking tothe sky to out people to ribbons with razor beams of hard radiant light. "

The radiant-powered Rezakiri, an insectoid Behemoth with elegant wings of radiant latticed archonite, was believed extinct for centuries. Even the Orrery, which has maintained meticulous historical records since the Upheaval, had begun to classify stories of the "winged demon of cutting light" as historically unconfirmed, and Dr. Priyani was ready to declare the Rezakiri a vivid legend, but not supported by physical evidence.

As if to correct the record in the flashiest way it could, the species suddenly reemerged just before she had the opportunity.

Umbral Behemoths take advantage of darkness and the power of the Umbral Void to survive, and radiant Behemoths like the Rezakiri thrive on sunlight. But even though their powers and abilities are based in the brightest end of the aetheric spectrum, each are just as deadly to biological life. Umbral aether eats away at its victims from within, while radiant aether destroys organisms from without, one cell at a time.

The Rezakiri returned to the Shattered Isles a living legend. But Kat and the Slayers she leads aim to make sure this is one Behemoth that goes back to being a myth.

-A Rezakiri will try to trap players in radiant prisms to protect itself when its health runs low.

-If the Rezakiri succeeds in trapping players in radiant prisms, the crystalline domes can be broken by battering them extensively with Slayer weapons.

Rezakiris can be found on the following Islands.

A long time since I’d been knocked down that hard. What in Saint Avellaine’s name had hit me? I blinked against the dawn, but the light wouldn’t go away. Not until a fast-moving shadow moved into my field of vision. The Farslayer pressed her lantern against my chest. As a rush of energy flowed into me, I saw it wasn’t dawn at all.

“Get to your feet,” she said. “No time for rest. You must hold off the Rezakiri while I revive the others.”

I saw the Farslayer rush to my fallen allies, all of whom were encased in bubbles of light that she attacked with her sword until they shattered. I must have been trapped in one myself.

Standing, I hefted my impact hammer and locked in another magazine as the Behemoth swept toward me, its wings shockingly bright.

Rezakiri. From an old Andari word meaning “the light that burns.” And burn the Rezakiri did.

The reports of a bizarre breed of Behemoth terrorizing the frontier had been sporadic, but came from reliable sources. The Rezakiri fed on rare radiant aether and could cut down airships and Slayers alike with concentrated beams of hard light - this despite the fact that the Orrery claimed radiant aether didn’t naturally occur at these elevations. That’s why the Regent of Ramsgate authorized the funds to send an experienced Slayer team to stop this one.

The next problem was finding the thing. For that we turned to a Farslayer, one of those intrepid Behemoth hunters who went where no one else could - or would. I’d worked with a few Farslayers before. They were odd, generally speaking, but most were skilled Behemoth hunters. They had to be to survive.

Our first encounter with the Behemoth had not gone as planned. The Rezakiri employed aether like nothing I’d ever seen before. Beams of burning light lanced from its crystal tail one moment, while thousands of small, deadly bullets of energy swirled from its core to surround us the next. After these battered us down, the hard light bubbles locked us into place, helpless and separated.

As the Farslayer freed the rest of my team and the Behemoth readied another strike of its long, whiplike tail, she quickly shared what tactics she knew. “The key,” she began, “is movement. Never stay in one place when this one lights up. If you don’t get out of the light’s way, it’s going to find its way to you.” She grinned and nodded. “Now move.”

The Rezakiri’s uncanny shriek cut through the night, a night that would soon be as bright as the sun. Together we raced forward to meet the unearthly dawn.