Pangar is one of the Behemoths in Dauntless. There are 3 versions of Pangars throughout The Shattered Isles. 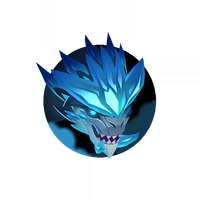 "The armour plates on a Pangar's back are frozen solid and very hard to break, but if you can sever its tail it will do a lot less harm."

Pangars are steeped in the power of frost aether, giving their tough, saurian hides a shiny surface like metallic ice. Their broad, plated scales form an overlapping carapace of protective armour along their backs and become crushing weapons when a Pangar curls its body into a wheel and rolls over its foes.

Bearing a clear resemblance to the Hellion, most scholars agree that the Pangar's morphology shows it to be the older of the two species. This has lent credence to popular theories that their fiery relatives descend from a dying Pangar that absorbed a surge of blaze from a Slayer's weapon at the moment of dissolution.

The Pangar’s rolling attacks are very similar to defensive patterns found in a hardy species of small insectivores found on hotter islands of the upper reaches. Like its cousins, the Pangar uses what seems at first to be a defensive maneuver as a brutal bludgeon that can smash the toughest Slayer flatter than a mancake. But where blaze-feeding Hellions can bore molten tunnels through the earth and launch themselves like volcanic projectiles, the dense and jagged frost core of a Pangar allows them to summon that energy to flash-freeze everything in sight—including Slayers.

Perhaps the most frightening thing about the Pangar species is how widespread they are throughout the Shattered Isles. Pangars have even been found on warmer islands without any of the cold or snow a frost Behemoth would find welcoming. Left unattended and unslain, a Pangar can transform any such place into a chilly hunting ground.

-The Pangar's scales will ice up over time. If they ice over completely, the Behemoth can become aether-charged, so break those scales to prevent—or end—that possibility.

-Like the Hellion, the Pangar has lightly armoured legs that are vulnerable to staggering strikes.

-A rolling Pangar can be an intimidating thing, but with the right weapon and sharp timing a Slayer can interrupt their roll and knock them for a loop.

Pangars can be found on the following Islands.

It Came From the North

The campsite was utterly wrecked by the time Kat arrived. The Ramsgate scouting party was lucky they weren't in the same condition. One survivor, a long-retired slayer who hailed from the northern reaches, called it the mysterious behemoth a Pangar. She swore it shouldn’t be this far south. Kat had to agree.

A green apprentice could have followed the trail. A wide, deep trench sliced through forest island leading into the woods beyond, ending in an open field. Then she saw it, shining like a jewel in the cold midday sun.

The Pangar had discovered a cluster of archonite buried not far beneath the surface and burrowed in for an aetheric feast. At first it barely seemed to notice Kat’s approach, bellowing its bizarre, oscillating roar to warn off anything foolish enough to interrupt its meal. Kat drew her sword and circled around a rocky knoll to flank the creature's main avenue of escape.

An earth-shaking stomp rattled Kat’s bones as the Pangar’s tail lashed out with unnerving speed. The blade-like armour plate missed her face but peppered her with stinging ice. The fight was on.

Kat held her own, striking between the beast’s armour plates when she could. The Pangar was speedier than it appeared, dancing about on two heavy legs, swiping with tail and talons even as Kat landed blow after blow. She severed a heavy chunk of its tail, triggering an unearthly scream of rage and pain.

A brutal slash to side of the helm pushed her back, but her armour held. Heigsketter did good work.

The Pangar closed in, blue eyes flashing silver with cold aetheric energy as it eyed her sword. Kat saw it was enraged, releasing the aether within its body like icy glass. But it was cautious.

The Pangar did something she'd never seen a behemoth do. It tucked its toothy mouth into its chest and lunged forward in a rolling dive - then just kept rolling right at her. Only training and reflexes allowed Kat to get out of the way in time.

“Well,” the slayer muttered, “that explains the trench.” The behemoth disappeared into the forest, leaving cold, bitter air in its wake.

This hunt wasn’t over, but it was clear she’d need allies. And Kat knew just the slayers for the job.