Kharabak is one of the Behemoths in Dauntless. There are 3 versions of Kharabaks throughout The Shattered Isles. 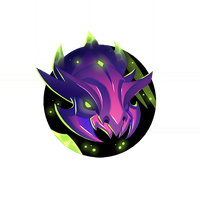 "The Kharabak's got the wings, maneuverability, and mean temperament of the biggest wasp you've ever seen."

An insectoid Behemoth with the uncanny ability to camouflage itself even in broad daylight, the gossamer-winged Kharabak can be a nightmare for unprepared rookies. Swift and agile with blade-like claws on its double-jointed forelegs, this gigantic wasp-like beast has a deep affinity for the frequencies of terra aether found within insects, arachnids, and other creatures that crawl upon the ground or buzz through the air. It can fling sharpened blades of compressed terra from its claws that cut grievous wounds through the sturdiest armour, and in just the last few decades appears to have evolved the means to summon swarms of stinging insects to protect itself from irritants. Irritants like Slayers.

Unlike many Behemoths that share physical traits with several bestial species—the Gnasher’s reptilian scales and mammalian fur, for example—the Kharabak truly does resemble nothing so much as a gigantic wasp. This outward similarity can lead many new Slayers to underestimate its cunning and diverse range of abilities. Rookies expecting a "bug hunt" instead find themselves trying to spot a flying terror that can turn invisible, cut flesh to ribbons from a hundred metres away, and slip away from the most well-timed strike at the last minute.

The Kharabak is certainly good for one thing. Slayers who face this big bad bug for the first time and live to tell the tale aren’t likely to underestimate a "simple" Behemoth ever again.

—When aether-charged, additional blades will protrude from the Kharabak's forelegs that improve its agility and strength. Break these blades to end the aether charge.

—Kharabaks can be interrupted during their blade-drag attack, which it can only attempt when aether-charged.

—The swarm of stinging insects the Kharabak can summon prevents Slayers from sprinting, increases stamina costs, and inflicts a small amount of damage. Slayers need only attack the swarm to destroy it—or ask a fellow Slayer for help.

—The Kharabak goes invisible during its enrage, but also uses this highly effective camouflage to recuperate. It won't heal up, but it may attack less often and become safer to approach. The trick is to be ready for sudden attacks when it is in this state, because they become much more difficult to predict.

Kharabaks can be found on the following Islands.