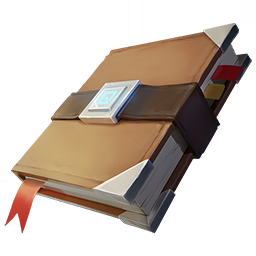 The Journal is a collection of lore containing information and secrets about The Shattered Isles. Journal entries are unlocked through gameplay and reveal mysteries of Behemoths, Ramsgate, and more.

The Relics and Ruin Collection was introduced during the Hunt Pass Season: Relics & Ruin.

The Clear Skies Collection was introduced during the Hunt Pass Season: Clear Skies.

Arkan Drew made one final adjustment in the interface and stepped back to admire his own work, something in which he rarely indulged himself. But if the Slayers of Ramsgate were to hunt strange new Behemoths steeped in charged terra aether, the L.A.D. Mark II would need to be precisely tuned to accommodate their lanterns. Terra, like all prime aetheric frequencies, possessed many unique qualities, and an improperly aligned attunement lens could cause a feedback loop that burned out the entire device—or worse.

Not for the first time, he wished he could join his friends in the coming hunts, if only to see his work in action against humanity’s shared foes. But he knew he was of far more use to the people of Ramsgate, the Arbourhome refugees who had taken shelter there, and his Orrery colleagues safe in far-off St. Avellaine, by staying put. His greatest contribution to the escalating fight was ensuring total preparation.

Granny Strega cinched up her traveling satchel—satchels, packs, pouches, and pockets were all filled with things she might need on this journey—and locked up her grounded airshop Hazel for the first time since she'd arrived in Ramsgate. Traveling to an island infested with Agaric spores and creatures the Arbourhome Farslayers weren't prepared to face was a bit outside her usual methods of operation, so she wanted to make absolutely sure she wouldn't be caught unawares.

True, the primary goal of this expedition would be discovering the current state of those islands, but Granny's goals weren't quite the same as those of Xelya or the Ramsgate Slayers that Kat Sorrel sent along with her. Their purpose, near as Granny could tell, was to inspire the refugees to take back their home. The Ramsgate Slayers were thinking along the same lines, she was sure, but also sought the power inherent in charged terra archonite to help in the overall war against the Behemoths.

Granny? She wanted those spores. All of them she could get. For those spores represented the first truly new alchemical discovery she'd heard of in ages. Living aether that could infest and alter not only aetheric entities like Behemoths, but also animals, plants, the very islands themselves?

Doctor Shaed Priyani reviewed the plan for the hundredth time. Unlike the expedition to the Deeps, she would be taking a backseat this time—but still intended to stay on high alert as her allies explored what had become of the islands that once comprised the Farslayer city of Arbourhome.

The spores that spread the Agarus' toxic infection and spread fungal growths and strange plant life across every island they touched were the first order of business. She knew many were interested in them for their own purposes, but she sincerely hoped Granny Strega would remember her request when the time came. The old alchemist was free to use them any way she liked, and Priyani was confident Strega wouldn't blow up the city, probably. But what the doctor wanted was samples on which to experiment. Living Behemoth parts were unheard of, for the most part. Severed limbs and other parts solidified when separated from the main body, but these Agaric spores were something very different.

Precautions against their spread were already being carefully prepared. And Priyani herself would ensure they did not escape her laboratory.

Xelya wasn’t a leader. Didn't want to be a leader. Didn't like leaders or leadership or being in charge of anything. That was city talk. Kat business. So why did these Arbourhome Farslayers keep looping to her to lead?

It was a silly question, she knew. Despite her… difficulty communicating with others at times, she wasn't stupid. The Arbourhome refugees were dejected, depressed, and were on the verge of giving up if they hadn't already. They made it to Ramsgate and found a Farslayer already there, one who hadn't been fighting against terra-mutants and gigantic fungal nightmares for the last several months and saw her as a symbol of hope.

Kat was the one who convinced her not to just hit the skies and run. Kat was one of the only ones who really understood Xelya, as much as any city Slayer could. They were more alike than not. Kat reminded Xelya that she herself had faced a similar quandary when the very first Ramsgate settlement was destroyed by a raging Gnasher. She could have fled then but didn't. And Ramsgate became the city on the verge of the Maelstrom due to her courage.

When that city was threatened by umbral nightmares, Kat worked with Old Arkan and other Slayers to make sure the people would survive in this new place. They'd even made a home for Xelya here, one that the other Farslayers were already starting to say felt like their home too.

Now it was Xelya's turn to play Kat. But she couldn't think of it as playing. She had to become Kat, or at least become what Kat was.

The Arbourhome Blight was going to turn Xelya into a leader. Whether she wanted to or not.