Hellion is one of the Behemoths in Dauntless. There are 3 versions of Hellions throughout The Shattered Isles. 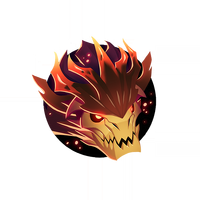 "You’ve got a Hellion on the horizon, cap. They're armourplated rollers that belch fire and lava, so I hope you're packing protection from blaze."

With a hot-burning core of living blaze at its heart, the aptly named Hellion can burn its way through solid rock, which it consumes and belches forth as an eruption of molten magma. Like its Pangar cousins, this saurian biped is surprisingly nimble for its bulk and size, able to roll its body into a living wheel that traverses the island distances with devastating speed, tearing up the landscape with the thick plates of armour running down its back.

Slayers, scientists, and eccentric armchair Behemoth enthusiasts have many theories as to how the Hellion and Pangar seem to have such similar anatomical structure, but feed on diametrically opposite ends of the aetheric spectrum. Many scholars posit a direct relationship between the two, and one tale that appears to have at least some basis in historical fact claims that a Slayer of old, perhaps even the First Slayer, mortally wounded a Pangar while wielding a sword steeped in blaze aether. Rather than a killing blow, all the aether emanating from the weapon kickstarted the Pangar's metabolism. But the only available source of more energy was the sword itself, which crumbled to dust as the Behemoth pulled every last bit of blaze from its steel to feed a strange new hunger. As a new Behemoth species rose to its feet to release an ear-splitting roar, the Slayer that had unintentionally created it saw a fiendish beast rising from the pits of the inferno.

Whether or not it's an accurate assessment of the Hellion's origins, many inexperienced Slayers make the mistake of approaching both the Pangar and its fiery opposite with the same tactics. Unlike the Pangar, for example, the Hellion can burn its way into an island, burrow beneath a Slayer's feet, then erupt from a caldera of their own making to fly in a graceful arc before landing with the explosive force of a magma bomb. Try as it might, no Pangar could manage that.

—Lucky Slayers who break the Hellion's scales have a chance to recover a molten orb that can boost attack and movement speed while protecting against more blaze damage.

—Breaking the Hellion's tail removes one of its most effective weapons.

—Focus attacks on the Hellion's relatively unprotected legs to stagger it more quickly.

Hellions can be found on the following Islands.