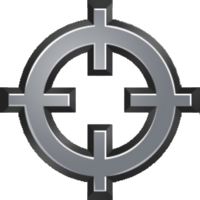 Bounties are tasks that can be completed to earn

Bounties rely on two basic units: Bounty Cards and Bounty Tokens. Spending a token lets you draw three random Bounty Cards. Choose one to add it to your active bounties.

You can have up to four bounties active at a time. Once you complete a bounty and claim your rewards, you can immediately spend another token to draw a new set of cards.

All Slayers will automatically get 10

Bounty Tokens at the start of each Hunt Pass, plus 4

Bounty Tokens every day, regardless of whether or not they log in. That means that in a typical 35-day Hunt Pass cycle, you’d get 150 regular tokens for free.

There is a chance that you’ll find

Bounty Tokens (both regular and premium) scattered across the Hunt Pass reward tracks. Use them and complete your bounties to work your way toward the season’s best loot.

If you don’t want to wait for your daily tokens, there will also be an option to buy them in the store. These premium tokens work just like regular tokens, except that they can carry over from Hunt Pass to Hunt Pass. This way, even if you end up with more tokens than you need, you can still make use of them in the next season.

Any unused regular tokens will expire at the end of the Hunt Pass season.

Once you have a token or two, you’re ready to draw your first Bounty Card! It costs one token to draw a Bounty Card.

Each time you spend a token, you’ll draw three random Bounty Cards. Choose your favorite card to add it to your active bounties. The other two cards will be discarded. 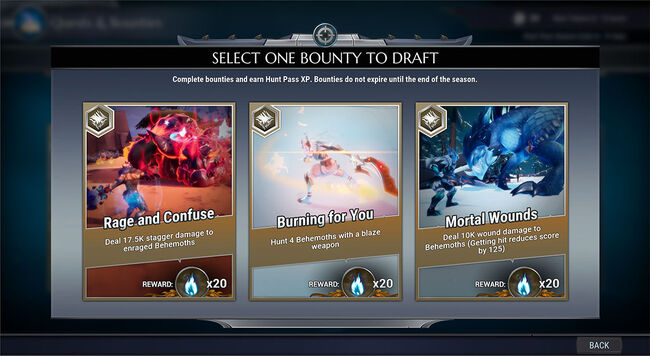 Once you have selected and finished a Bounty you will get a notification that you can claim your reward. 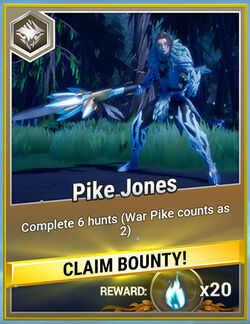 While you’re always guaranteed to draw three Bounty Cards, what you draw from the deck can vary. The cards we’ve shown so far have all been bronze cards – the most common type of Bounty Card. But you’ll also find rarer cards hidden in the stack. Silver cards offer slightly better rewards than bronze, while gold cards (the rarest of the rare) ramp up both challenge and rewards. 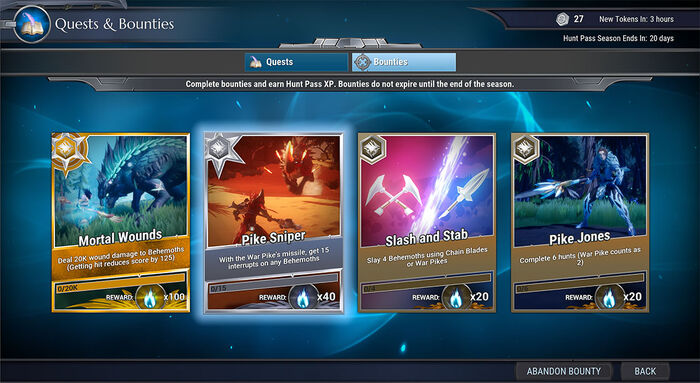 Worried about having to choose between bronze, silver, and gold? Don’t. We’ve built the draft system so that you’ll always draw three cards of the same rarity.[1]