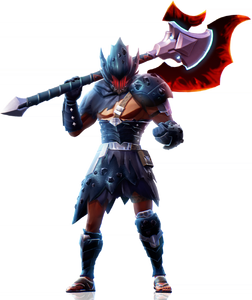 The Axe is a slashing weapon type in Dauntless, though it has the power to stagger behemoths.

A heavy hitter for tactical Slayers. The Axe is a relatively slow hitting weapon, making up for it with substantial damage on each hit. To make the most of an Axe a Slayer must learn to make the most of each opening, committing time to empowering attacks when they can. With proper use of this ability to invest in charging attacks a Slayer is rewarded by an escalating damage buff and even the ability to stand firm through Behemoth attacks. Top this off with some of the most powerful special attacks available, enhanced by proper management of charging attacks and determination, and the Axe gives a tactically minded Slayer a devastating weapon against the Behemoths.

The Axe has two unique core mechanics, Charging and Determination, which are directly linked. Charging is a ability by which attacks can be charged, investing time to be rewarded with increased damage, Determination meter gain, and, at maximum Charge, Resolve, immunity to staggering effects and reduced damage taken. Damage is still be taken by the Slayer however. Determination adds attack damage for each active level, stacking up to 3. Meter is generated by landing charged attacks and once the meter is full Determination can be levelled up by landing a special attack, unlocking the next level of damage bonus.

Charging is the core of Axe gameplay, it increases the damage you deal on your charged swings, allows you to build up your meter to stack up Determination, and also gives you extra damage on your specials if you hit them while the meter is full. Most attacks also give you Resolve if charged 3 times, making your attack uninterruptible and granting a 50% damage reduction to the user. Every charge level increases the meter gained by attacks after it, within the same combo. With a maximum of two chargeable attacks in a combo, up to 6 levels of charge can be gained in total. Meter is only gained on hit, not simply for the charging of the attack.

Determination is the other unique mechanic on Axe, it's built up from charging your attacks and using your special when your meter is fully charged to stack it. This special must hit a target in order to grant the next Determination level. By default, Determination stacks up to 3 times, however the Overcharged Cylinder mod allows it to go up to 4 stacks. Every stack of Determination gives you more bonus attack damage and expires after a certain period of time if not refreshed. At maximum Determination landing a special with full meter will simply refresh the duration of the Determination bonus. On expiring Determination returns to 0.

The following weapon skins can be used with the Axe: