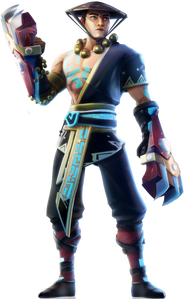 The Aether Strikers are a blunt weapon type in Dauntless.

Slayers will get access to the aether strikers fairly early in progression – right around the same time you get your first pair of repeaters. Once you’ve grabbed the Scarred Master’s quest, you’ll be able to talk to her for all of your striker crafting needs. And there will be quite a few! Just like with the sword and war pike, you’ll be able to craft a unique set of strikers for each Behemoth you slay.

Instead of acting as an extension of self, the strikers function as a catalyst, transforming the very Slayer who wields them into a weapon of flesh and deadly focus. But the aether strikers can only enhance what is already there. If you truly want to master the Way of the Fist – and prove your worth to the Scarred Master – you’ll need to do more than throw a quick punch. Combos. Chains. Mantras. Techniques. Each aspect of the aether strikers must be understood, practiced, and honed to perfection.

The strikers are pugilist’s weapons, but they also have a spiritual component. To truly master them, you’ll need to learn to charge up special energies called Mantras, and understand when to unleash their powers.[2]

The following weapon skins can be used with the Aether Strikers:

Perhaps the most important component of the Aether strikers system are techniques.

These are special moves that vary depending on how many Mantras you have charged up.

The Tempest Form is the simplest technique, requiring only one Mantra to use.

Activate it to focus your energy and increase your attack speed. This is a relatively long boost.

This strike damages the first target it hits and deals damage over time for an extended period.

The Adamant Bolt releases a focused, cannon-like blast of energy, dealing damage to the first enemy it hits.

It also deals bonus damage if either Tempest Form or Karma Breaker is active, and even more damage if they’re both active.

You’ll need to light up all three Mantras in order to use this one.

Adamant Bolt can be swapped for Titan’s Crash, a devastating close-range Attack that does more damage when both Tempest Form and Karma Breaker are active.

Once you’ve charged up a Mantra, you’ll see a timer and two special skills light up on your UI.

The first one is Surge: a skill you can use after gaining any Mantra or using any technique. Tap your special button to execute a dash attack that punches through enemies and – this part is important – refreshes your timer.

Before we go further into techniques and combo chains, let’s explain the Mantra timer. This glowing meter lets you see how much time you have left before your current Mantra(s) expire. You can refresh it by either (a) activating Surge or (b) landing another successful combo before it times out. If it expires, you’ll lose all of your current Mantra charges and have to start over with another combo.